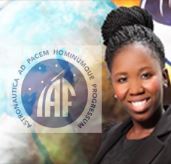 Lulu Makapela will receive her award in Jerusalem in October.

Council for Scientific and Industrial Research (CSIR) Project and Contract Manager for aerospace and composites, Advocate Lulu Makapela has been named one of the International Astronautical Federation’s (IAF) 2015 Young Space Leaders.

Makapela joins a group of six exceptional students and young professionals between the ages of 21 and 35, who have demonstrated leadership in their academic or early careers.

The 2015 Young Space Leaders will receive their awards at the closing ceremony of the 66th International Astronautical Congress in Jerusalem, Israel in October.

Makapela who is also the CSIR’s representative on the South African Council for Space Affairs, previously worked as project manager for the National Earth Observations and Space Secretariat, an initiative of the Department of Science and Technology hosted at the council and in this post she supported the Director-General of this department on the executive committees of the Group on Earth Observations.

She was also Deputy Director of the Advanced Manufacturing unit within the Department of Trade and Industry.

Speaking to SABC Digital News, Makapela says she is very pleased and honoured to be named one of the recipients of the award.

“It really means a lot to me because my education background is in law and it is gratifying to know that the contribution I’m making to science in general and astronautics in particular is recognised.”

“I received this prestigious award because I was involved in a number of activities to reach out to young people on the African continent and internationally. I have been the principal facilitator for the establishment of different organisations and platform for students and young professionals to share knowledge on space, science, technology and law.”