A Young Space Leader at the CSIR! 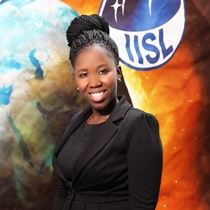 Adv Lulu Makapela has been named one of the International Astronautical Federation’s (IAF) 2015 Young Space Leaders. Lulu is the CSIR’s representative on the South African Council for Space Affairs and is also project and contract manager for aerospace and composites within the CSIR.

She joins a group of six exceptional students and young professionals between the ages of 21 and 35, who have demonstrated leadership in their academic or early careers. The 2015 Young Space Leaders will receive their awards at the closing ceremony of the 66th International Astronautical Congress (IAC) in Jerusalem, Israel, in October 2015.

Lulu previously worked as project manager for the National Earth Observations and Space Secretariat, an initiative of the Department of Science and Technology hosted at the CSIR and in this post she supported the director-general of this department on the executive committees of the Group on Earth Observations (GEO). She was also Deputy Director of the Advanced Manufacturing unit within the Department of Trade and Industry.

With a passion to attract African youth to consider undertaking space science and related legal careers, she serves as a member of the International Instiute of Space Law (IISL) and is the Africa Regional Co-ordinator for the Manfred Lachs Space Law Moot Court competition. The most recent Africa competition took place at the CSIR in May 2015.

She is also the co-chair of the Africa Leadership Youth Forum, which promotes space science among African young professionals and students.

In 2012, Lulu served as a member of the IAF’s international project management committee and organiser for the youth plenary, which continues to seek ways to better develop and empower the next generation of aerospace enthusiasts.

The IAF is an international space advocacy organisation based in Paris, and was founded in 1951 as a non-governmental organisation. It has over 270 members from 64 countries across the world. The members are drawn from space agencies, industry, professional associations, government organisations and learned societies. It is linked with the International Academy of Astronautics and the IISL, with whom the IAF organises the annual IAC.