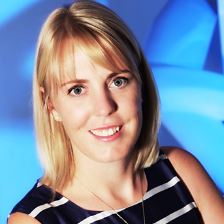 Marié Botha is one of just a handful South Africans who has met Buzz Aldrin, the second man on the moon. It was a meeting that might not have happened if she had not decided to change her career field when she was at university.

In her first semester in her first year, Botha recalls, she made a life-changing decision to turn to science. Looking back years later, she is grateful that she is a professional in this industry, because she believes she is making a difference to South Africa’s growth and development.

Botha, who grew up in Pretoria, is a researcher at the Council for Scientific and Industrial Research (CSIR), a leading scientific and technology research, development and implementation organisation in Africa. “The CSIR is committed to supporting innovation in South Africa to improve national competitiveness in the global economy,” it explains.

She was studying business commerce at the University of Stellenbosch, which she enjoyed, Botha says, when she was bitten by the science bug. “During my first year the realisation dawned on me of how much more the science field could offer, and how you could develop your own personal interest to really impact on the South African economy and its society.”

In 2006, Botha completed her Bachelor of Commerce honours in logistics management; she went on to receive her Masters of Science in the field in 2008. “I graduated in 2006, started work in 2007. I did my Masters in my first year of work,” she says.

“I got this incredible opportunity to start my career at the CSIR, as well as further my studies. This I have to attribute to my parents, who took the time to expose me to the absolutely incredible organisation that the CSIR is.”

Botha started her career at the organisation as a researcher in the field of operations research, logistics and quantitative methods. From there, she moved to supply chain management, lean manufacturing and the aerospace industry.

The 32-year-old explains that the decision to change career fields also had to do with the science field being stimulating and unpredictable. “It also afforded me the opportunity to further my academic qualification and my career development on a continuous basis.”

Botha got involved in managing the supplier development programme for the Aerospace Industry Support Initiative (AISI). The main focus of the initiative is enabling and co-ordinating industry to be integrated into global supply chains.

She has authored numerous scientific papers and developed strategies for the aerospace and non-aerospace industries. In addition, Botha is a member of the International Astronautical Federation’s Workforce Development for Young Professionals Committee and the Royal Aeronautical Society. She also serves on the council for the Aeronautical Society of South Africa.

As the manager of the aerospace and composites initiatives, Botha runs a small and highly effective team of what she calls “a dedicated technical and administrative staff with support from other functions within the CSIR”.

“My main responsibilities are to manage the Department of Trade and Industry’s Aerospace Industry Support Initiative, as well as the Department of Science and Technology’s composites initiatives,” she explains.

“I am also the key account manager for CSIR aerospace, which requires me to co-ordinate the internal CSIR aerospace functions.” With this profile she liaises with local and international aerospace organisations and companies.

“International colleagues are intrigued by our history, our journey and our people, and in my field of work, how we managed to achieve the technological excellence we have.”

Botha says the South African industry has a strong history based on excellence through products such as the Rooivalk helicopter, the Seeker unmanned aerial vehicle (UAV), and the SumbandilaSat.

Work in the industry in South African currently ranges from research and development institutions and manufacturers that supply directly to Airbus’s A350 and A400M programmes, among others, to a large defence industry as well as a network of small medium and micro enterprises supplying these organisations.

“The main benefit of the industry to address the societal needs of South Africa is assisting with safety and security. This is obtained through the obvious defence applications, but also through additional not-as-evident cases such as UAVs safeguarding our borders, or even assisting with [curbing] rhino poaching.

“The aerospace sector also assists with food security through crop management by satellite remote sensing, utilising satellite data to monitor natural fires, and developing an early warning system to assist with preventing and fighting these fires.”

Aerospace is a key element in the government’s industrialisation strategy, she explains. “As such, our work contributes to the Department of Trade and Industry’s Industrial Policy Action Plan. This focuses on key areas to boost the country’s industrialisation capacity and participating economic base.”

And one job created in an advanced manufacturing industry creates multiple additional jobs, she adds. “In doing so, a major societal benefit to South Africans is indirectly addressed.”

Marié Botha says it was such an honour to meet Buzz Aldrin, the second man on the moon.

Botha is a member of the Golden Key International Honour Society. In 2014, she received the Collaboration Award and in 2012, she was received the Outstanding Contribution by a Team Award. She also received the Promising Young Researcher Award in 2008.

About her meeting with Aldrin, Botha says it was an incredible experience. “It was a humbling experience meeting and talking to such a science icon, discussing South Africa, and its impact and future growth. I now have the photo of a lifetime.”